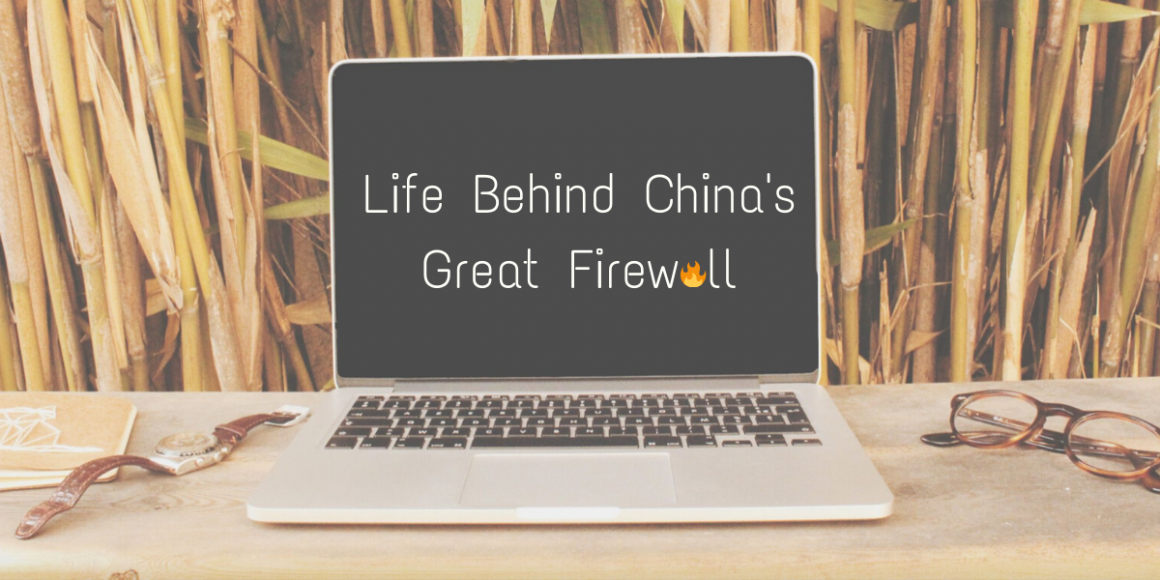 If I’m honest, there are quite a few things that annoy me about living in China. The Chinese don’t understand my need for personal space. They stare at me ALL OF THE TIME. Don’t even get me started on the spitting… I could go on, but I won’t. But by far the biggest frustration has been the internet. There hasn’t been a single day since I arrived that the internet worked as it should.

Every Site I Need Is Blocked

It’s no secret that the Chinese government blocks upwards of 10,000 websites. These include news sites, social media apps, streaming services, email providers, as well as a host of others. If a site contains any content that the government doesn’t like, it’s going to be blocked. I think I underestimated how frustrating this would be in practice. So many sites that you’d think would be fine are actually considered objectionable by the Chinese government and therefore blocked.

Can you imagine life without being able to Google information? No YouTube? No Gmail? That is life in China… well, for most people. It might surprise you that the average Chinese internet user doesn’t care about not having access to blocked social media apps, search engines or shopping sites because there are Chinese versions to use. Instead of YouTube, people use YOUKU. There is Taobao to take the place of eBay. Weibo is used instead of Twitter and so on.

I Would Die Without a VPN

Unlike most people here, I don’t engage on Chinese digital platforms (most of which aren’t in English anyway). It’s bad enough that my every move is recorded by CCTV cameras, the last thing I want to do is give the government even more of my information. Followers of this blog know that I regularly post to Facebook, Instagram, and Twitter, none of which would be possible without a Virtual Private Network (VPN).

Most of the one million or so foreigners here, as well as about 30% of the Chinese population, depend on a VPN to stay connected to the world outside of mainland China. VPNs allow users to bypass the Great Firewall and access banned sites. There is no struggle greater than trying to be productive online in China without a VPN.

But here’s the thing, having a VPN is not a surefire solution. Just last week I attempted to video chat using Facebook Messenger. Although I can send and receive messages just fine (with a VPN of course), the video call feature is not working. My guess is that the government is to blame. There are times when I engage the VPN and am only able to access some blocked sites but not others. This tends to happen more often with Google products, Facebook, and YouTube, at least for me. It doesn’t happen often, but when it does it always seems to be at the most inconvenient moment.

During politically sensitive times like this year’s 70th anniversary of the People’s Republic of China or the protests in Hong Kong, the national government will disrupt most VPNs. There is a constant battle afoot between the government and the VPNs. When the government decides to crack down, un-approved VPNs will then work to find new ways around government censorship. There is a continual back and forth between them. It’s all pretty precarious, nothing works 100% of the time. If your VPN works now there’s no guarantee it will continue to do so.

Am I breaking the law? I don’t know and I’m afraid to ask. I was initially told that VPNs were illegal in China but it’s not totally clear if they are or not.

Supposedly using government-approved VPNs is okay – and yes, they’re completely useless if you actually want to surf the web freely. Honestly, I wouldn’t even know where or how to get an approved VPN. Call me paranoid but I don’t want to draw the government’s attention if it can be avoided.

From what I can tell, Chinese citizens not legally allowed to use VPNs at all. The legality of VPN usage for foreigners is less clear. With the little research I’ve done, I couldn’t find a case where a foreigner was punished for using a VPN beyond having their VPN deleted. Does that mean that foreigners don’t get in trouble or is it that the government has done a good job of keeping it hush-hush? We’ll never know.

Earlier this month my cellphone died. Apparently, there IS a limit to the number of times you can drop a phone before it stops working. #whoknew Chinese manufacturers make some really good phones so I considered buying a replacement here. That’s until I realized that virtually none of the apps I need could be installed, including a VPN. As I understand it, even when I leave China I won’t be able to access Google Play with a Chinese phone.

Until I can travel out of the country in a few weeks to get a replacement, I’m borrowing a Chinese phone from a colleague. This phone is pretty useless. I can’t install the apps I need. I can’t check my email. All I can do is pay for things with WeChat/Alipay, order a Didi and check the weather. I’d just as well go without a phone until my trip if I didn’t need to buy stuff.

Remember what that was like? Of course, my internet here isn’t actually dial-up but many times it seems just that slow. I suspect that there are simply too many people and not enough bandwidth. My apartment is one of about 280 in this building. There are about 20 buildings in the complex. I’m not sure how the internet gets to each apartment but I swear everyone in my building must be sharing bandwidth.

It’s gotten to the point where I can predict what time of day the internet speed will slow to a crawl. It isn’t unusual for me to go to bed at 6 or 7 PM because the internet is so slow I cannot even get a page to load (I waste an insane amount of time waiting for pages to load). If I wake up at 2 AM internet speeds are decent but as soon as people start waking up things get sluggish again.

What’s super crazy is that the minute I decided to write this post, my VPN started getting wonky and the internet has behaved even more poorly than usual. I wonder if that’s a coincidence or not…

Okay…vent over 🤐… I want to hear what’s the most annoying thing about where you live?